What we mean by this is;

Sheds:  When a shed is installed the floor is placed down first, the walls go on top of it and the build is continued.

Log Cabins:  With the majority of log cabins, the cabin is first built and the floor goes in afterwards and sits within the cabin and is not an integral part of it.  The floor system is known as a ‘floating floor’ and should not actually touch the cabin walls although the floor joists may be and more often than not are attached to the log cabin foundation beams. 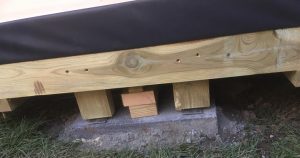 All our cabins are built around the perimeter of a base and it is prefered that it is built on a foundation beam.

As standard we supply 100mm x 44mm tanalised beams.  These are supplied to go around the perimeter of the building and to sit between the first log and the base.

Using these gives your first layer of logs protection from sitting directly in any water.

Our Log Cabins are extremely precise things, the best machinery is used to mill the timber and as such there is little tolerance. They are designed for each log to sit directly on top of one another and are interlocked in the corners via corner connection and the tongue and groove connection along the log.  They are designed to withstand vertical forces, they are not however designed to withstand any lateral forces.

It is quite often tempting for a landscaping / building company, as they are used to doing with patios, to add a slight incline to the base to help with drainage.  They tend to do this as a matter of course without consultation and are really chuffed to tell you that you have a 2 degree incline!

This is really not very helpful as in effect you’ll be building your cabin on a slope and subjecting it to the lateral forces simply from gravity.  A cabin is really not up to handling gravity and the subsequent sideways force it puts upon it when on any sort of slope.

The end result will be a buckling and warping building and most certainly it will feature split and strained logs over time and of course the inevitable tears as you see your lovely building disintegrate over time.

The biggest thing though about an unlevel base is that it makes it bloomin’ hard to put the thing together, fully expect all sorts of problems with a wonky base: